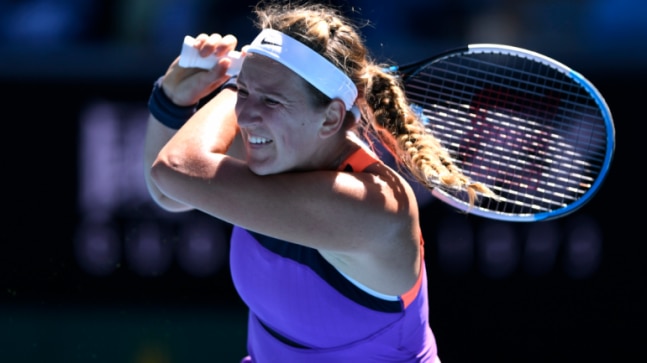 Two-time champion Victoria Azarenka was dumped out of the Australian Open in the first round on Tuesday after a 7-5, 6-4 defeat by main draw debutant Jessica Pegula.

Former champion Victoria Azarenka crashed out of the Australian Open in the first round after a shocking 7-5, 6-4 defeat at the hands of debutant American Jessica Pegula on Tuesday. However, fifth-ranked Svitolina notched a 6-3, 7-6(5) victory over World No.50 Marie Bouzkova of the Czech Republic in a tight two-hour battle, which included an evenly-matched, entertaining second set.

Belarusian Azarenka, who won her two Grand Slam titles in Melbourne in 2012 and 2013, tarted the match with a substantial lead. She wasted no time in bagging easy points against Jessica, who was still adjusting her tune. However, things quickly fell apart as American Pegula, the world number 61, took the next five games to seal the set.

Azarenka’s troubles continued in the second set and she took a medical timeout while trailing 4-2 after appearing to have trouble breathing. She returned to hold serve and followed that up with a break to draw level at 4-4, but Pegula broke straight back before serving out the match, sealing victory with an ace.

Pegula won the match 5-7, 4-6 causing one of the biggest upsets of the Australian Open 2021. However, Vika’s first-round exit can indeed be linked with the hard lockdown of the players. But nothing can change the final result now. Undoubtedly, fans will surely miss the Vika power in the tournament.