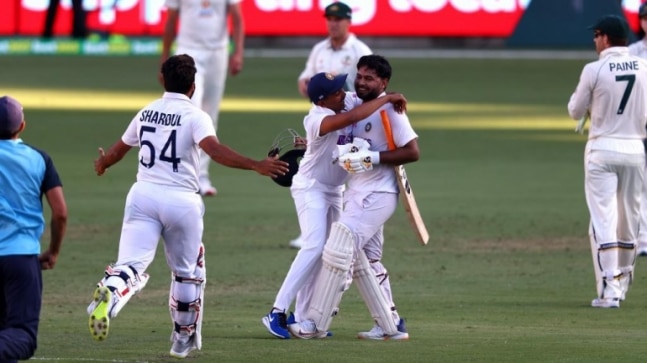 VVS Laxman said he was watching the final day’s play of the Brisbane Test with his family and “got very emotional” when Pant hit the winning boundary to win the match for Team India.

Former cricketer VVS Laxman revealed that he broke down in tears when India beat Australia at the Gabba to clinch the Test series 2-1 in Brisbane last month.

India breached Australia’s fortress and became the first team in 32 years win a Test match at the venue when Rishabh Pant, Shubman Gill and Cheteshwar Pujara helped the visitors gun down the target of 328 on Day 5 of the final Test to clinch the series and retain the Border-Gavaskar Trophy for the second time in a row.

Laxman said he was watching the final day’s play with his family and “got very emotional” when Pant hit the winning boundary to win the match for Team India.

“There is no doubt about it. In fact, I became very emotional. I was watching the last day and following it along with my family. When Rishabh and Washington were batting, I got very tense myself because when you’re not playing the game, you’re not in control.

“I just wanted India to beat Australia and win the series, especially after what has happened in Adelaide and what had happened before the Gabba Test match where everyone was talking about Indians are scared of going to Brisbane where Australia hadn’t lost in a long time,” Laxman told Boria Majumdar on Sports Today.

Laxman, who averaged nearly 50 against Australia and also played his final Test in Adelaide, also revealed that it was the second time he cried after India won a crunch game.

“Twice I cried, once in 2011 when India lifted the World Cup because I always wanted to be part of a World Cup-winning team and I played alongside this group of players who were so close to me and they went on to realise their dream of winning the World Cup.

“And I always wanted to beat Australia in Australia, I was not able to do that as a cricketer. I was so proud that this young Indian did that. Tears came down my eyes. Words cannot express what a wonderful, inspirational achievement not only for cricket but for the entire country,” Laxman said.