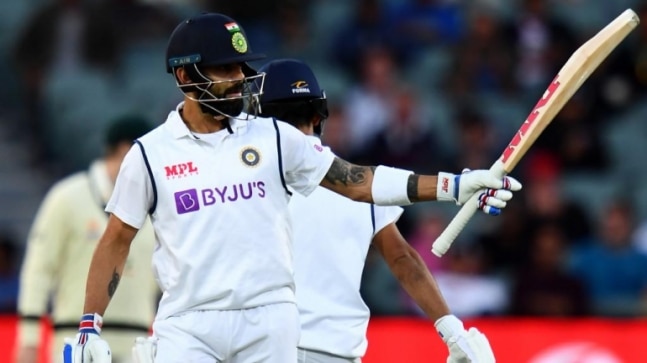 The focus is once again on Virat Kohli. The India captain will be returning to action for the first time since he took paternity leave and returned home after the first of a 4-match Test series in Australia. Kohli, who is a father now, will be hoping to end his hundred-less run when he takes on England, who have become one of his favourite foes in the recent past.

Virat Kohli has gone 13 months without scoring a Test hundred, a rare blip for the India captain who has hit 27 hundreds in 87 matches. He had a difficult outing in New Zealand during India’s 2-0 series defeat. However, Kohli showed signs of return to peak form when he hit a fluent 74 in the first innings of the Adelaide Test match which India eventually lost by 8 wickets.

Virat Kohli will be keen on making it big in the upcoming series against England. India will be facing a lot of England in 2021 as they will also head to the Old Blighty for a 4-Test series later this year. If recent records are anything to go by, expect a run-fest from the India skipper.

Virat Kohli has topped the batting charts in the last 2 series against England. The 2014 series in which he struggled to put bat to ball in English conditions seems to be a distant past. Kohli had suffered a horror run in England, managing just 134 runs in 10 innings.

However, ever since, Kohli has hardly had any prolonged failures in Tests, be it at home or overseas. The India captain worked on his weakness against the moving ball. During the 2018 trip to England, Kohli buried the ghosts of the 2014 series and went on to score 593 runs in 5 matches, including 2 hundred.

At home, Kohli loves facing England. In his maiden series against England in 2012, Kohli had scored 188 runs, including a hundred, in 4 Tests. The India skipper was in fine form during England’s next visit in 2016-17. He amassed 655 runs in 5 Tests and averaged over 100. 2 hundreds were hit and Kohli notched up his then highest Test score of 235.

Virat Kohli needs 489 runs to go past Sunil Gavaskar’s tally for the most runs scored at home against England in Test cricket. Kohli is at the 6th spot on the Indian list with 843 runs from 9 matches. He has the opportunity to go past an array of Indian batting greats, including Sachin Tendulkar and Gundappa Viswanath.

Cheteshwar Pujara is not far behind with 839 runs and the in-form India batsman also has the opportunity to break Gavaskar’s record. Pujara holds the record for most hundreds by an Indian batsman at home against England in Tests with 4, 1 more than Kohli.

Most runs scored against England in home Tests

Most hundreds as captain in home Tests

India and England will begin the 4-Test series from February 5 in Chennai. The 2nd Test will also be played in Chennai before the two teams head to Ahmedabad for the last 2 Tests. The 3rd Test will be a day-night match played with pink-ball at the rebuilt Sardar Patel Stadium.